Despite being only the second smallest country in the world, Monaco certainly compensates with its grandeur and extravagance. Its geographical size is small, but its gastronomic reach is vast. Unsurprisingly then, there is no shortage of fine dining eateries in the world’s glamour capital. At Heli Securite, we regularly transport our clients to the finest restaurants on the French Riviera and Monaco, and based on our expertise of the best gastronomic spots in the Principality, we have compiled a list of the top restaurants in Monaco.

Commissioned in 1987 by Prince Rainier II, legendary chef Alain Ducasse was tasked with an apparently unachievable mission – create the world’s first three Michelin starred hotel restaurant in the Principality. The deadline was four years, the achievement accomplished in no more than three.

27 years later, Le Louis XV maintains its respected reputation thanks in no small part to Ducasse’s protégé Franck Cerutti, who is said to have “olive oil running through his veins.” Choose from his menus entitled “The Farm,” “The Sea,” and “The Vegetable Garden” for food as simple as their titles suggest, yet, so wonderfully intricate. Rediscover old and familiar flavours in new and exciting combinations. 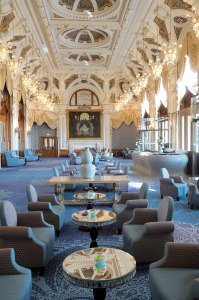 n restaurants come loaded with a certain weight of expectation, and rightfully so. Robuchon is the world’s most decorated chef with 26 Michelin stars. The Joel Robuchon Monte Carlo is no exception, offering the quintessential French dining experience at its finest. Unsurprisingly for a Robuchon restaurant, the presentation is vibrant, the flavours are intense, the attention to detail is minute and the ingredients are innovative. Think quail caramelized with an apple purée, think langoustine ravioli with truffles. The passion for gastronomic excellence permeates the restaurant as an open plan kitchen allows exclusive insight into the careful preparation of each dish by executive chef Christophe Cussac.

Every year people come to Monaco arriving in droves upon the snaking roads of the Pre-Alps, aboard a superyacht or by helicopter from Nice to Monaco to witness the famed Grand Prix. Away from the racetrack, however, the Brasserie Restaurant at Columbus Hotel is trying to earn the Principality a reputation elsewhere. With glorious views over the Princess Grace Rose Garden, this endearing little brasserie may well do just that. Subsequent to the recent emergence of a Monaco’s latest culinary trend, the Brasserie Restaturant at Columbus is serving some of the best and freshest Mediterranean food hand-selected from local markets. The brasserie menu offers a fine selection of seafood, vegetables and cuts of meat inspired by the seasonal ingredients of the surrounding countryside.

L’Hôtel de Paris is one of Monaco’s most famous hotels and pursuant to its high level of accommodation, the resident restaurant, Le Grill, is of equal stature. Diners are left unsure which way to look. As the roof rolls back to reveal the heavens above, beautiful dishes full of flavour are served under their noses. The change is a complete transformation from midday, when routine business lunches fill the room with the chatter of executives. By night romantic candlelit dinners fill the restaurant with intoxicating aromas.

Le Grill’s menu is a Michelin starred masterpiece, ranging from the traditional to the original. Tempura of langoustine precedes soufflé to complete an eclectic Provençal menu that is both irresistibly light and devilishly moorish.

For some more exotic dining, the Buddha Bar in Monte Carlo is a fine opportunity to sample oriental food in a luxury setting.

Since its arrival in 2010, the Buddha Bar has been serving its diners a fine combination of Eastern delicacies from Japanese sushi, to fresh Chinese noodles and scented Thai curries. A lounge room with cocktail bar and DJ until late has also added a novel twist to dining in Monaco. The chefs use the plate as though it were an empty canvas, structuring their food in bold peaks and brazenly splashing it with vibrant sauces. Bright red prawns come alive among a latice of asparagus and squid ink rice.

If you would like to travel to one of the aforementioned restaurants in Monaco, visit our immediate booking page for 24/7 assistance in booking you Monaco helicopter charter.