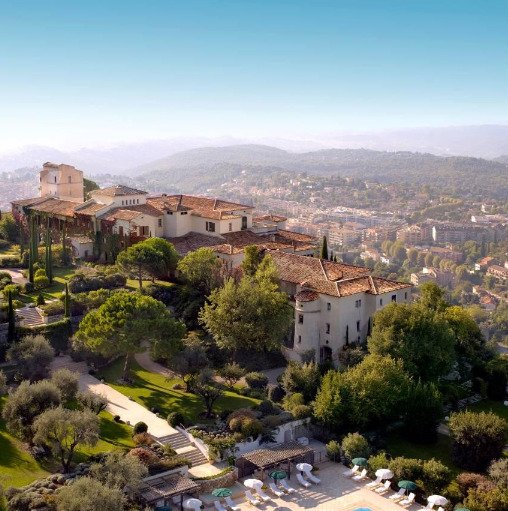 Trying to find a luxury hotel on the French Riviera can be a tricky affair; but, perhaps, not for the reasons that you might imagine. The problem comes not because of a lack of luxurious boutique hotels and five-star residences, but because there are just so many of them from which to choose.

For our clients looking for the very best, which will inevitably mean a heliport so that guests arriving in Nice can fly by a luxury helicopter directly to the front door, we have put together a list of the hotels which get our thumbs up:

This hotel is a veritable oasis of calm set in the hills above Vence. The Relais & Chateau hotel is located on the site of a former residence of the Knights Templar on the road to the auspicious Col de Vence. The hotel, which enjoys far-reaching views over the coast, was recently named as the most “charming hotel in Europ

e” in the annual Villegiature awards. Set in immaculate parkland, its facilities include a discrete helipad, 46 rooms, suites and private villas and five excellent restaurants and bar areas. There is also a luxury spa with treatments by La Prairie from which non-residents can also benefit.

Welcome to one of the most praised hotels in Var –  La Residence de la Pinede, a luxurious resort situated on the outskirts of Saint Tropez. It has access to its own heliport, which means that guests can arrive by helicopter from Nice or Monaco in less than half an hour. The hotel opened in 1936 on Plage de la Bouillabaisse and benefits from its own section of pristine beach. Perhaps the hotel’s piece de resistance is its gourmet restaurant, La Vague d’Or, which recently became one of the few restaurants in the world to be awarded three Michelin stars.

This hotel is another one of our favourites in Saint Tropez. With direct access to a heliport, it ensures that visitors can be sipping their first glass of champagne in the hotel bar in no time at all. Byblos Hotel was opened in the heart of Saint Tropez in 1967 and has been a favourite with the international jet set ever since. It is also home to the exclusive Caves du Roy, a legendary nightclub where generations of stars have danced the night away.

This is another truly exceptional Relais and Chateaux hotel. Overlooking the Golf of Saint Tropez, it is situated on a hill near the town of Gassin. The hotel is the ultimate in tranquillity, and boasts a wonderful spa, which offers a huge range in treatments as well as a stunning swimming pool.

Next on our list is a luxury hotel situated at the opposite end of the French Riviera, in Monaco. The stunning hotel on the edge of the Mediterranean is set in four hectares of lavish gardens, and boasts a unique lagoon and swimming pool with cascades, indoor swimming area and children’s paddling pool. Visitors making a reservation in this four-star hotel can benefit from the heliport in nearby Fontvieille which allows guests to fly from Nice Cote d’Azur airport to Monaco in just seven minutes.