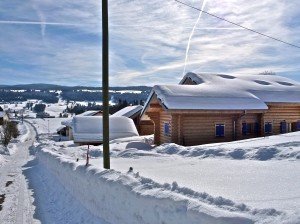 The Vallée de Joux with its lake and long watch-making tradition is a world of its own in rugged and unspoilt countryside nestling between Jura Mountain Ranges.

From Mont Tendre – the highest peak in the Vallée de Joux (1679 metres above sea level) – affords a fantastic view of Lake Geneva and the Savoy Alps all the way to the Bernese Oberland. The whole region with its many beautiful vantage points is a paradise for hikers, horse and mountain bike riders.

The Lac de Joux at an altitude of 1000 metres above sea level is the biggest water surface in the Jura Massif. Famous for its winds, it attracts keen windsurfers and sailors as well as other water sports enthusiasts and bathers.

In summer there is a ship service. A railway line runs along the lake and through the pine forest and Jura moorscapes from Le Sentier to Le Brassus which for almost 300 years have been strongholds of the watch-making industry.

The «L’Espace Horloger» museum in Le Sentier provides an insight into the history of chronographs and repeating watches as well as today’s production of luxury watches. And the luxury brand Audemars Piguet runs its own museum in Le Brassus.

The «Watchmaking Trail» runs from Geneva to Basel, consists of 27 sections and relates the history of watches.

«L’Espace Horloger» watch mueseum in Le Sentier – history of watch-making and a precious collection of clocks as well as a reconstructed old watch-making workshop.

Fort de Vallorbe, «Pré Giroud» fortification – looks like a small chalet from the inside but turns out to be an underground fortification dating from World War II.

Steam Railway – the 14-kilometre-long railway line from Le Pont to Le Brassus was opened in 1899. On a few selected days, steam trains operate on this line in addition to the regular trains.

Slow Up – on one Sunday in July the roads around Lac de Joux are reserved for bicycles, scooters and inline skaters. Up to 30’000 participants take advantage (July).

Triathlon in the Vallée de Joux near Charbonnières – with various start categories also for the general public and children (July).